Before our daughter Chelsea was born I had all sorts of illusions about life with a child, none of which involved me being a stay-at-home-mum. My pre-Chelsea identity was so dependent on career and uni and sport that I hadn’t for a second, considered that this would be any different after Chelsea was born. I had planned on returning to uni when Chelsea was 6 months old to study physiotherapy but Chelsea had other ideas. She refused and would scream continuously if anyone tried to feed her from a bottle (even though it was expressed breastmilk), she woke a lot at night (and continued to until she’d got all her teeth at 2) and would not sleep during the day unless she was physically touching me (a good baby carrier became our lifesaver!). I agreed (albeit very reluctantly) that me returning to full time uni was not in the best interests of this relentlessly needy little being . I’d never once considered staying home to care for the small person we’d created to be a legitimate, worthy choice and I struggled a lot with accepting this and “lost” myself a bit in the process. If only I had yoga in my life at the time! But I didn’t...so in order to regain a sense of normality and self I started distance running again, something which I enjoyed immensely and did a lot of before, and to a lesser extent during my pregnancy. I set myself a goal to run the Gold Coast Marathon (yes the full 42.195km) and as soon as I started training I felt like I’d found myself again. I had something to do outside of feeding and changing a baby! I thought I’d given my body lots of time to recover from birth but there were very obvious signs that my body wasn’t ready for this type of intensity...which I duly ignored. I finished the marathon but it cost my body dearly. The physio said my injury would take at least 6 months to heal properly but probably more like a year, and in the mean time absolutely no running whatsoever. I was lost again. 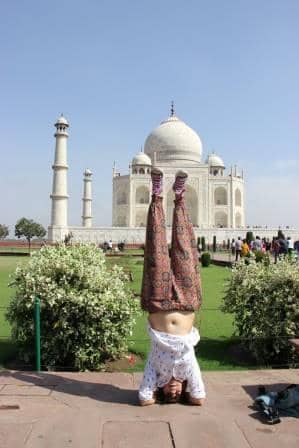 We moved to Hervey Bay a few months later and I met Polly at the markets. I still needed to fill the running gap. I’d done yoga on and off since high school and always enjoyed it so decided yoga would be better than nothing until I could start running again. What started purely as a need to do something physical with my body and get out of the house once in a while has become so much more. Now I can’t imagine life, least of all parenting, without yoga. When an asana is frustrating or challenging I’ve learned to breathe and relax instead of getting tense. I’ve also learned that this is sometimes (particularly in Trikonasana...) easier said than done and am aware of it. Frustrating and challenging toddler behaviour can be approached in the same way. I’ve learned to accept that sometimes practice sessions don’t go to plan or life with a toddler means that days or even weeks don’t go according to plan...and that that’s ok and not to get hung up on it. I’ve also learned to just be able to be in the moment and enjoy it for what it is at that particular moment in time.  I can now be held in the asana and respect it for what it is without wishing it was the sort of challenge that distance running is. I can now happily spend time at home raising Chelsea without feeling like I should have gone back to uni or returned to work. I’m so glad I’ve realised I actually have the best job in the world! Yoga has given me faith that no matter what Chelsea goes through in life, she will have peace because she will have the gift of yoga. Unless maybe if she ends up in hospital from insisting on doing Ardha Chandrasana while walking up the stairs!

Then there are other parenting moments, such as a recent early miscarriage, that I literally don’t know how I would have survived without yoga. Yoga was my safe place at an unfamiliar and emotional time. It gave me the courage to get out of bed when I just wanted to hide, compassion towards others who have had struggles of their own and peace in the knowledge that my physical body knew what it was doing even if my mind didn’t like it.

I originally wrote this a month or so ago, when Polly first approached me to write something for the newsletter. I needed to write it when I did, to acknowledge what I was feeling and to heal. On reflection now though, these simple few sentences above seems inadequate on so many levels. However no words of my own could possibly articulate my experience of yoga and miscarriage so instead I’ll use the words of Amy Jirsa:

“Yoga is the dance between the light and the dark within you. The light is what brings you back to the mat and the darkness is what you uncover there. Don’t be afraid of this darkness; these are only shadows and though you’ll have to walk down some pretty dark alleys, remember you are grounded in the light, and that light will set you free.”

Outside of class I can often be found on my mat down by the Scarness pier early in the morning, you’re more than welcome to join me J

No longer willing to compromise your wellbeing.

Yoga is the lay persons neuroscience - Yogis have known for centuries that there are layers of mental activity that can be harnessed and directed. When attention becomes concentration and concentration establishes a pause between the rise and fall of thoughts, we arrive into a state known as meditation. The interconnections between the layers of consciousness create the conditions for wisdom.. it arises in the pause, in the interruption of habitual thought.

Is a drunk monkey driving your life?

“As soon as there is stopping, there is happiness. There is peace. When we stop like that, it looks as if nothing is happening, but in fact everything is happening. You are deeply established in the present moment, and you touch your cosmic body. You touch eternity. There is no more restlessness, no more seeking.” Thich Nhat Hanh

Yoga provides a context in which teens, living in a sea of peer pressure, performance stress and emotional change, learn restraint and self reflective awareness. This course for teenagers aged between 12 and 15 years of age, will both challenge and nourish them.